In this first of a fabulous four-part installation, fashion forward Emily of Paper Tiger Press will be taking an expert look at unique and beautiful wedding gown choices to help your individuality shine on this most momentous of occasions! Take it away Emily... 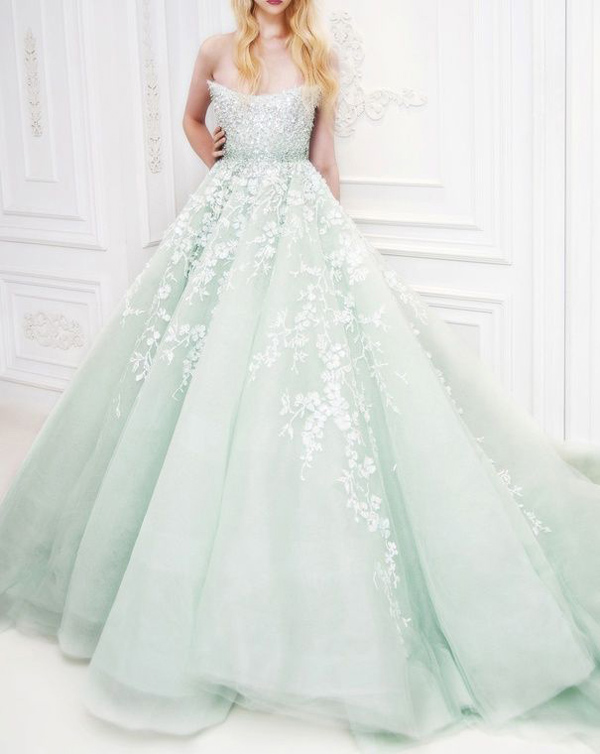 Look at more than two wedding gown websites and it'll probably hit you that strapless ballgowns have kind of become the industry standard. Sure, it's a cut that's almost universally flattering, but is it really you? If you're harboring some Disney Princess aspirations, I say go for it! There's no better day to be in a ballgown, walking towards your Prince Charming. For everyone else however, it can be a frustrating process to find a dress that speaks to your individuality as a person...much less a bride. If you're reading this and nodding sympathetically, I've got you covered. Here are some ideas you can consider adopting for your own big entrance.

In an industry built on white, a coloured gown is the easiest way to make a style statement. To be honest, coloured wedding dresses aren't exactly a new idea (see: any traditional Asian wedding) but in the international bridal market, it's definitely a rising trend. 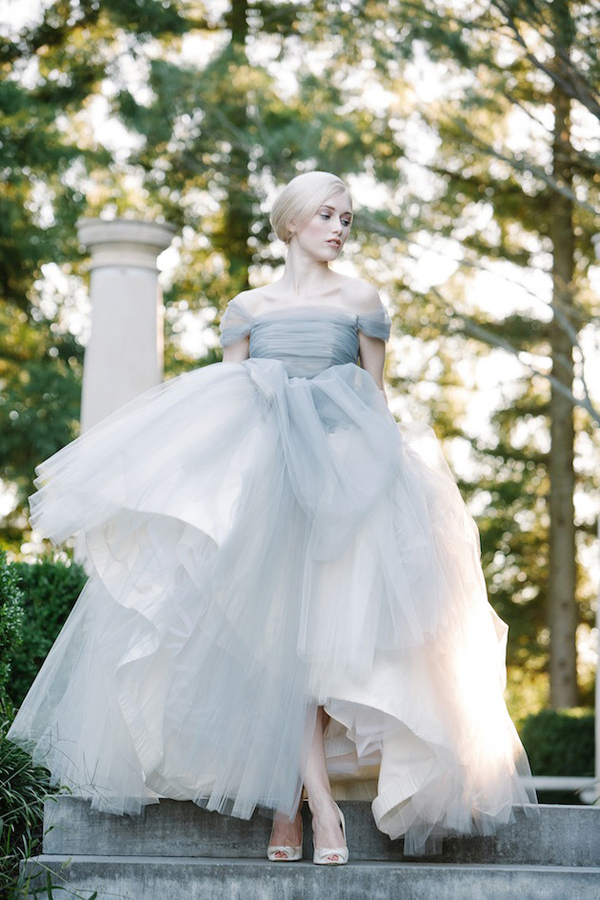 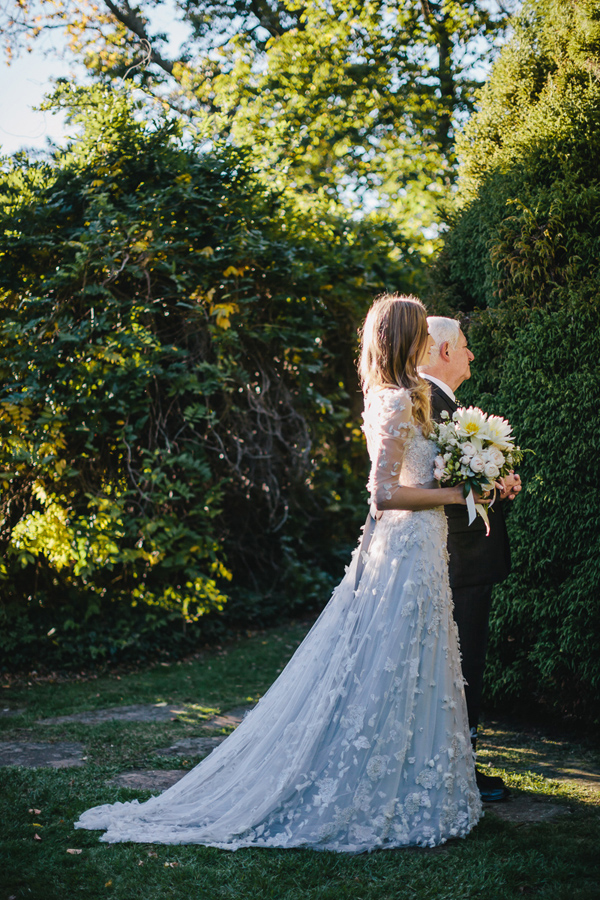 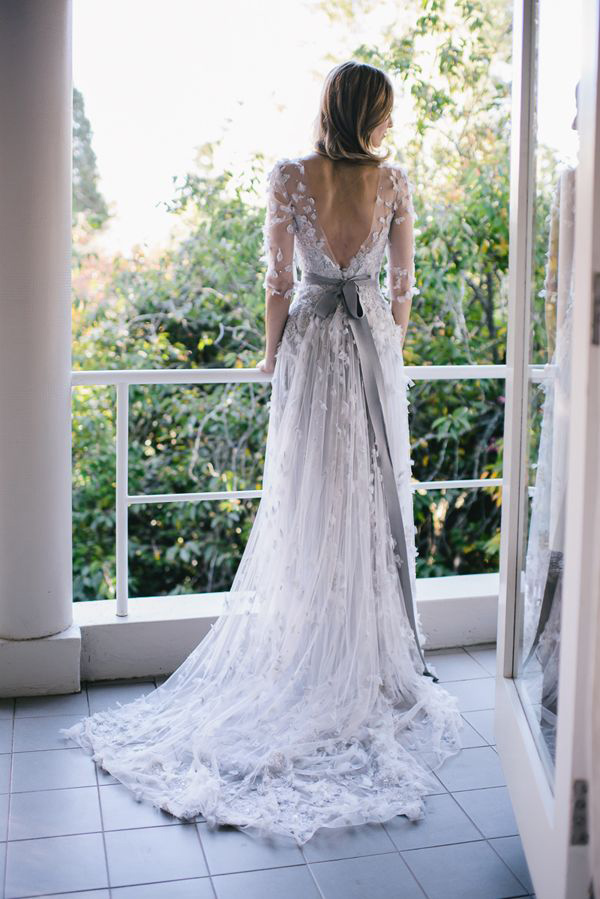 Dress by Elie Saab via Once Wed. 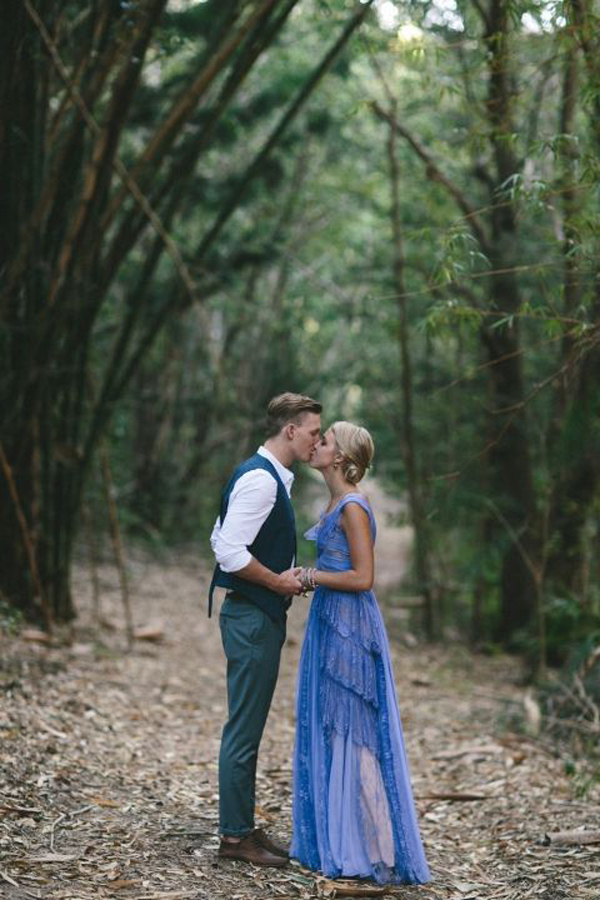 Dress by via The Lane. 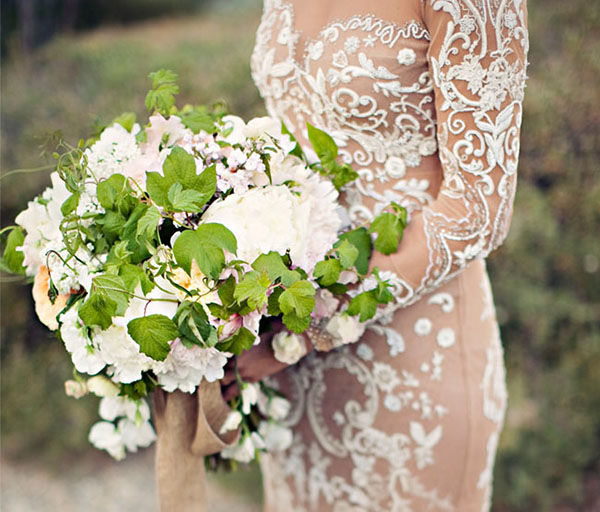 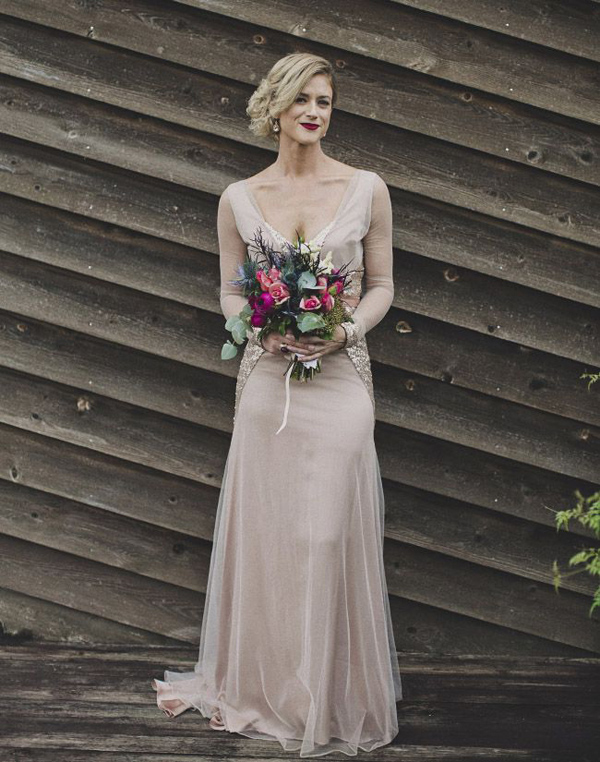 Dress by Rhea Costa via The Mysterious Girl. 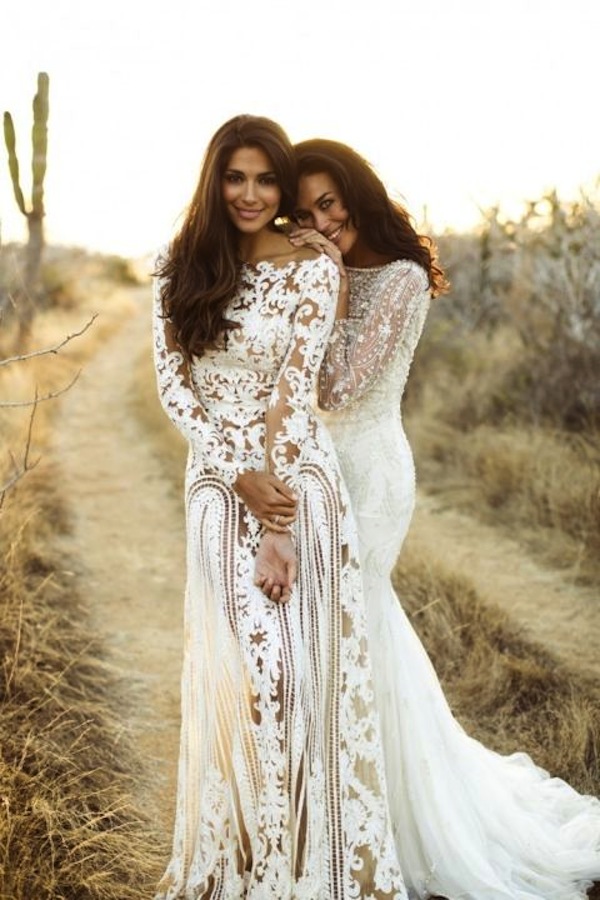 Dress by Zuhair Murad via The Lane.

The credit for coloured dresses goes to none other than Vera Wang. Not only for sending pastel wedding gowns down the runway, but for introducing rose-tinted gowns in her diffusion line for David's Bridal, cementing it forever as the mainstream's alternative to white. 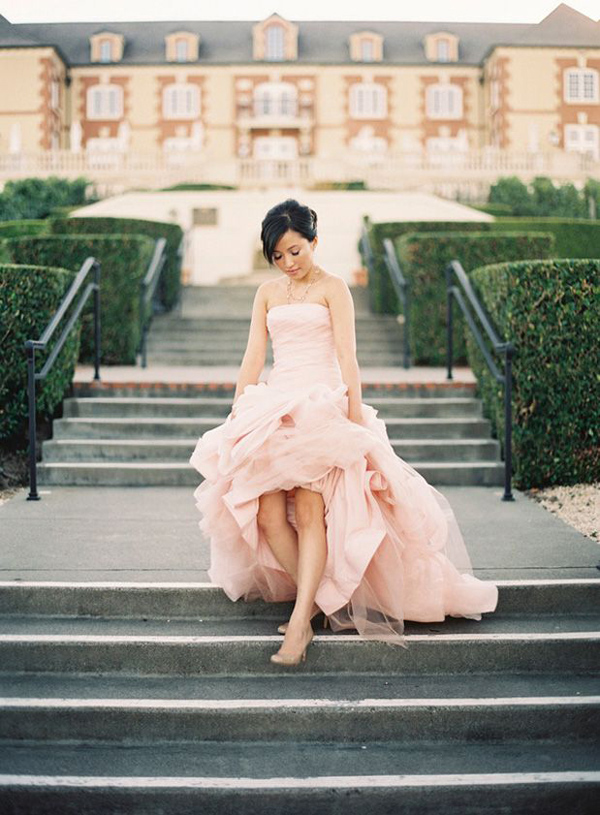 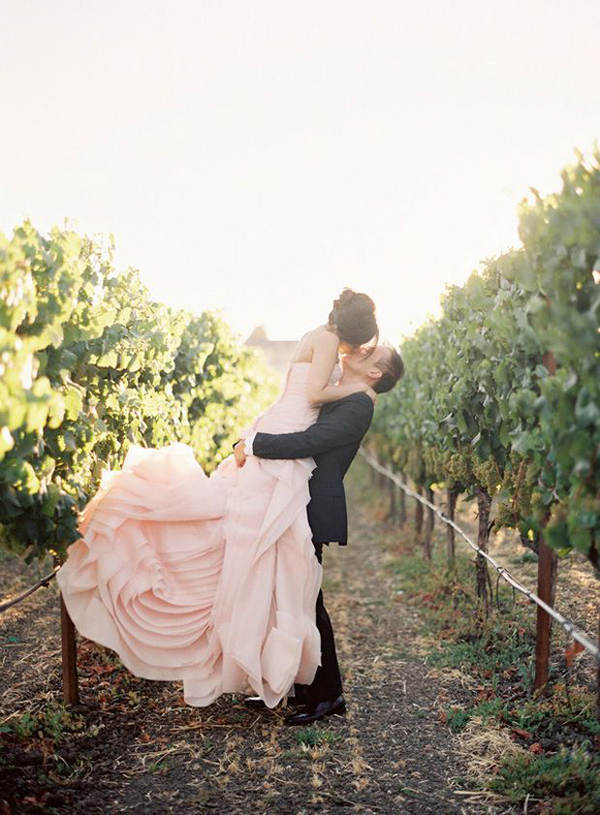 Dress by White by Vera Wang via Grey Likes Weddings. 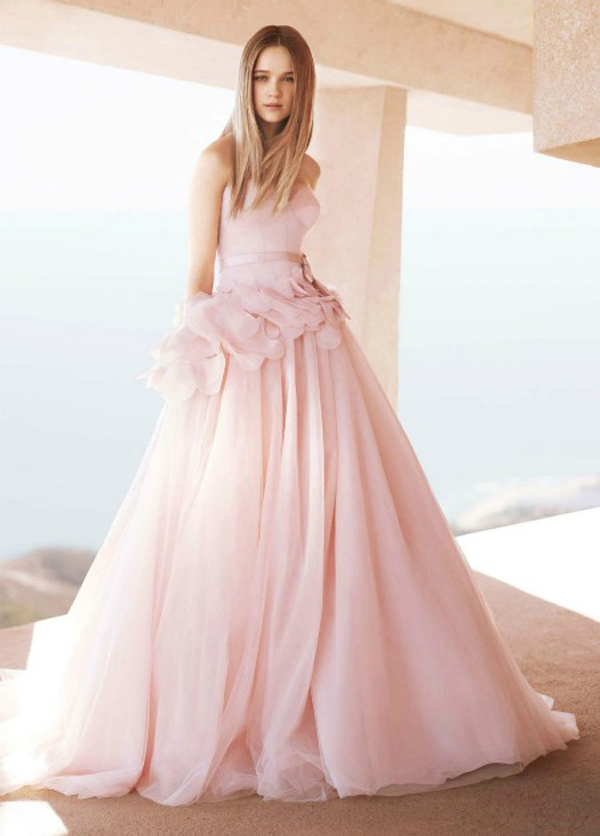 Dress by White by Vera Wang via The Budget Babe 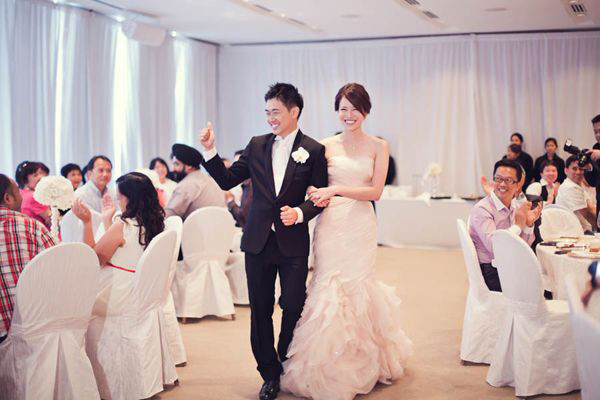 Dress by (Singapore-based) Silhouette the Atelier via The Wedding Scoop. 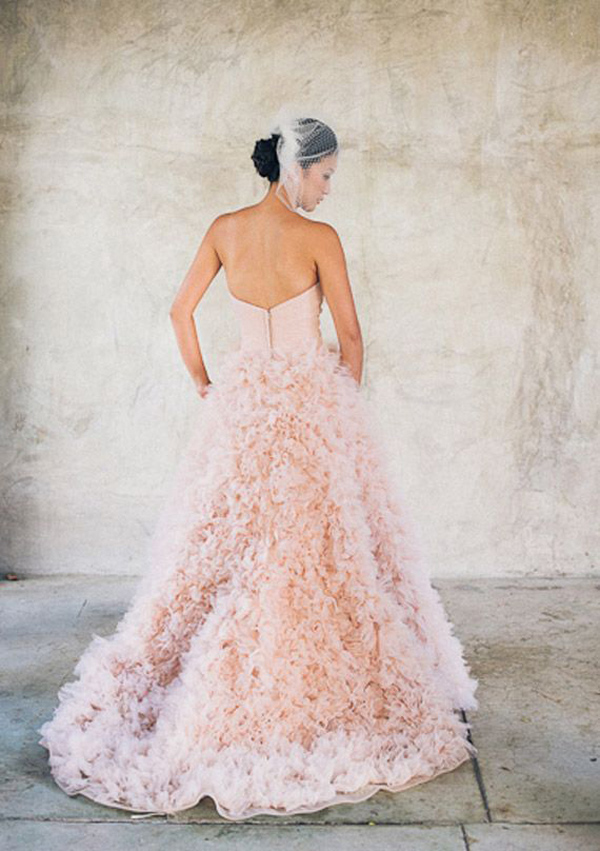 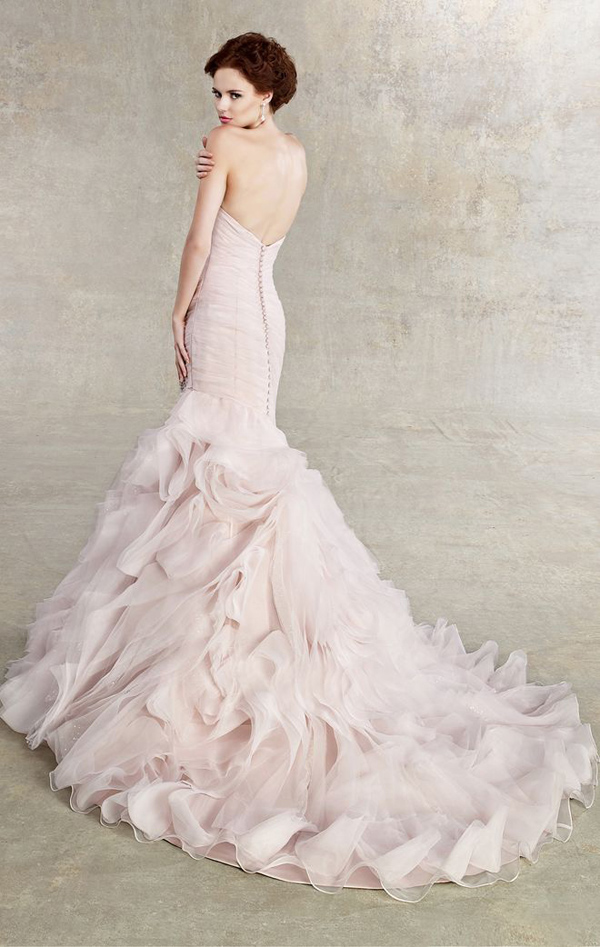 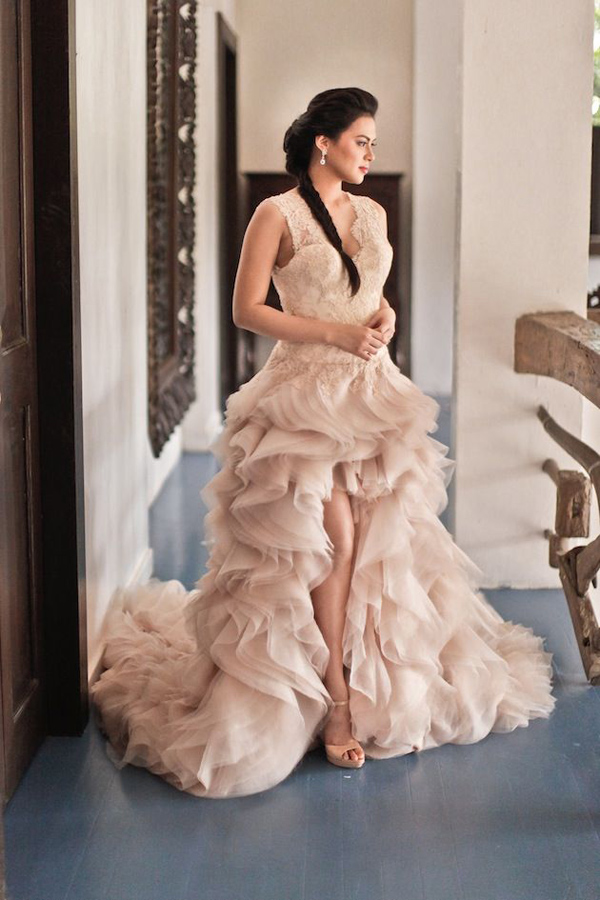 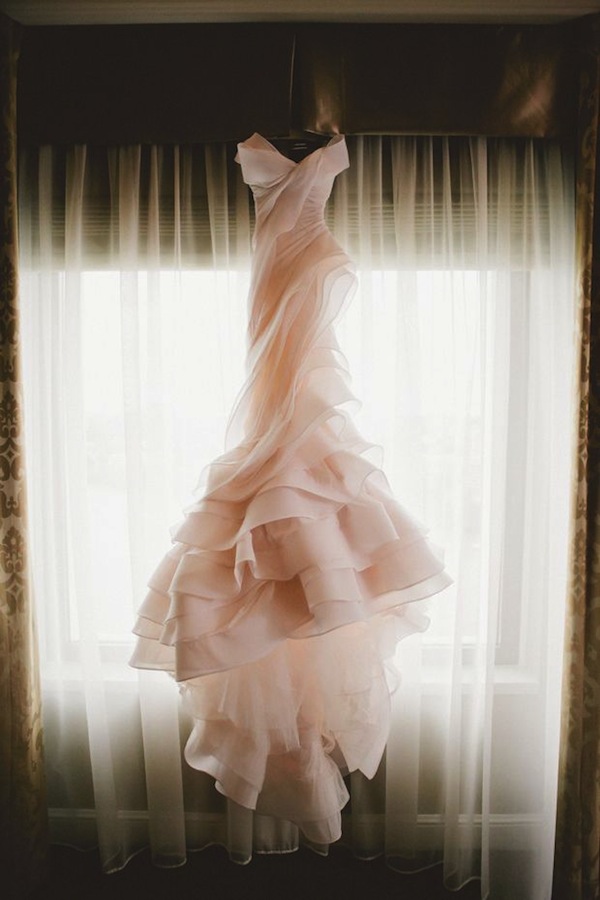 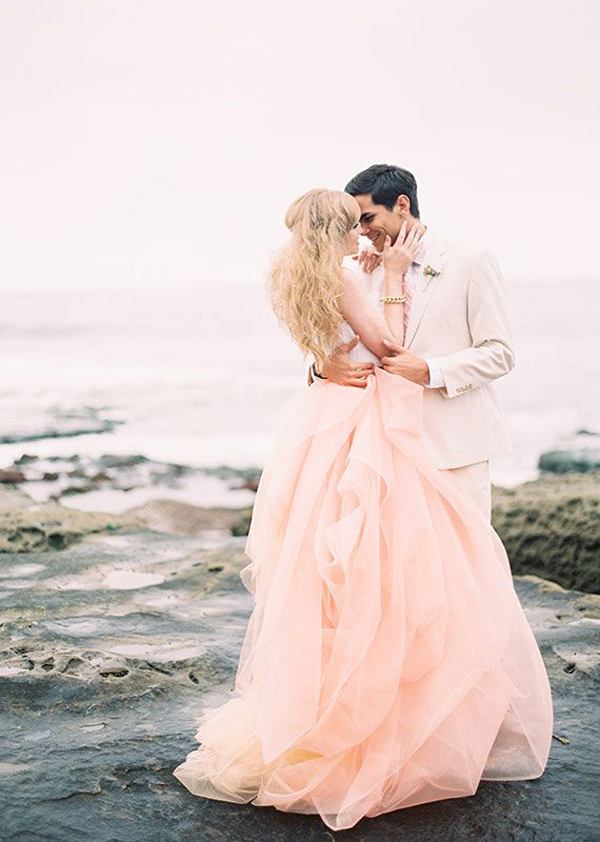 Fashion history aside, pink is a fresh take on virginal white without being so bold as to raise any parental eyebrows. But don't just take my word for it: pink gowns have won over girl-next-door types like Reese Witherspoon, Jessica Biel and Kaley Cuoco on their big days, which says a lot for the wholesome appeal of this sweet shade. 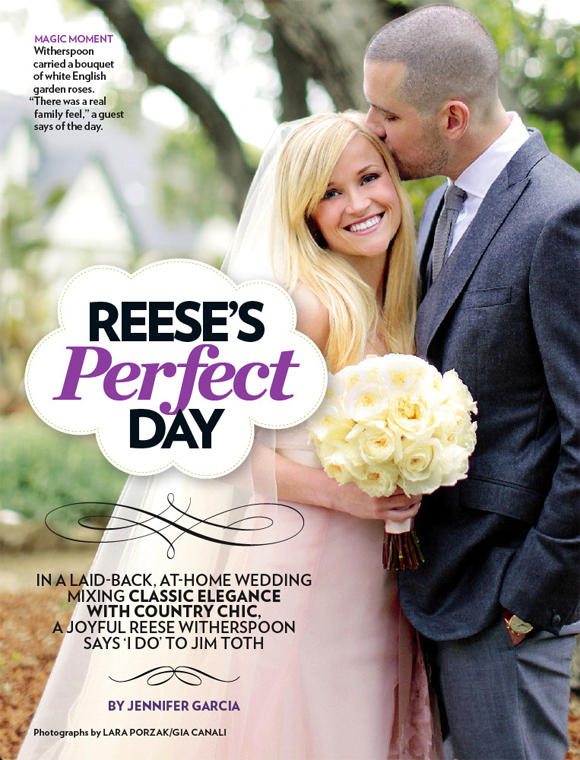 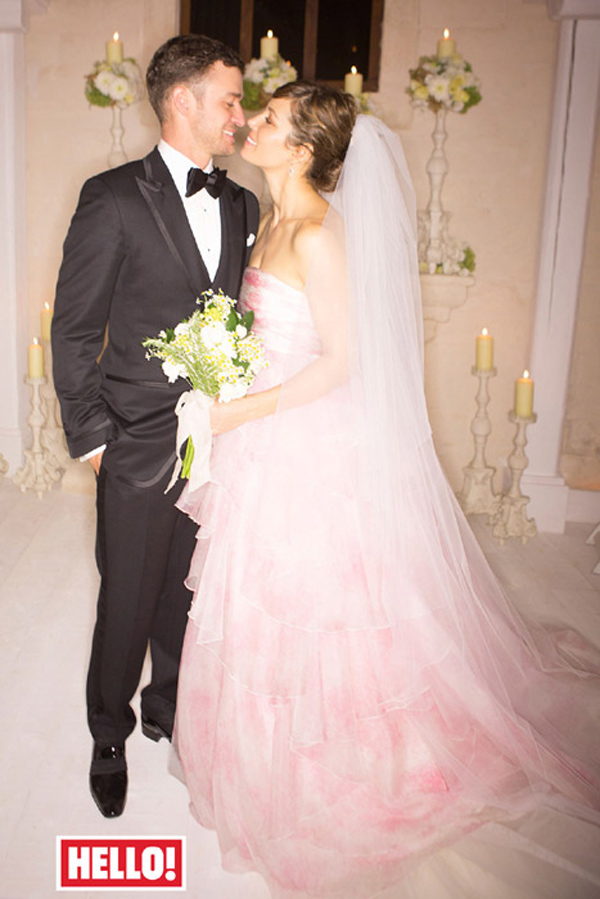 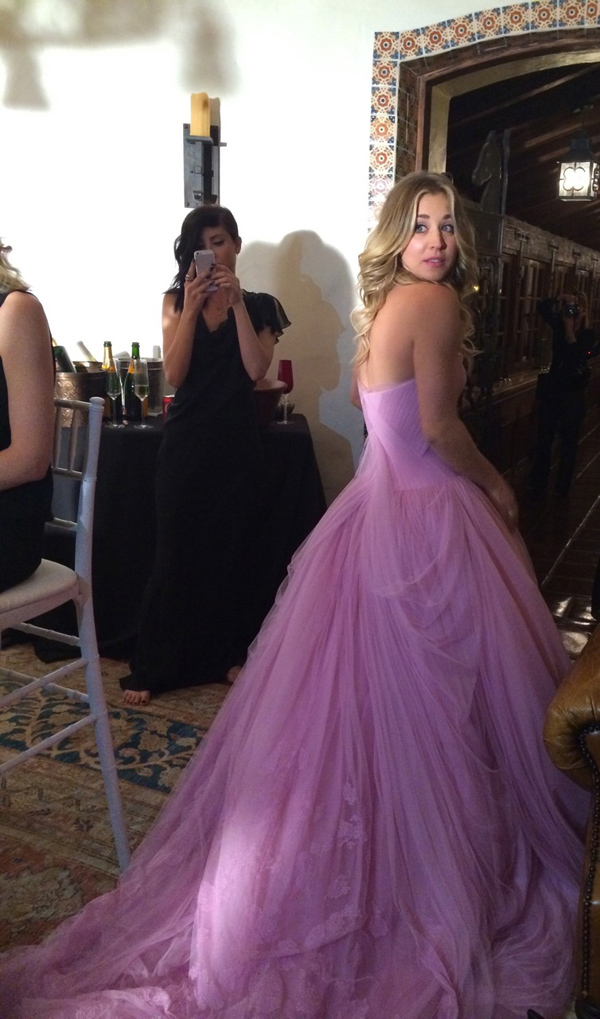 Via The Skinny Stiletto.

If you're really out to turn heads however, forget the pastels and go for the bold. There's no better way to own your wedding style than to wear a colour you love, and that you know looks great with your complexion. 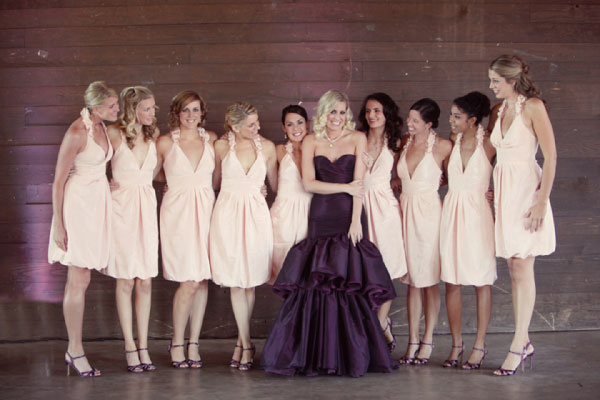 Via Style Me Pretty.

Unusual colours are memorable too - I saw this photo of a redheaded bride in a green Gucci wedding gown more than 3 years ago, and it's been seared into my memory ever since. Talk about making an impression! 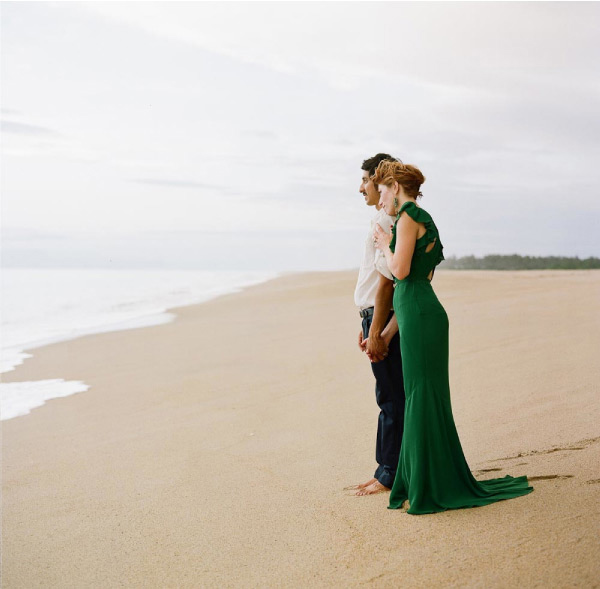 Dress Gucci by via Style Me Pretty.

Lastly, on the completely opposite end of the colour spectrum, we have black gowns. Despite the connotation, black wedding gowns don't necessarily have to look goth. In fact, style icon Sarah Jessica Parker wore black when she was married 17 years ago... 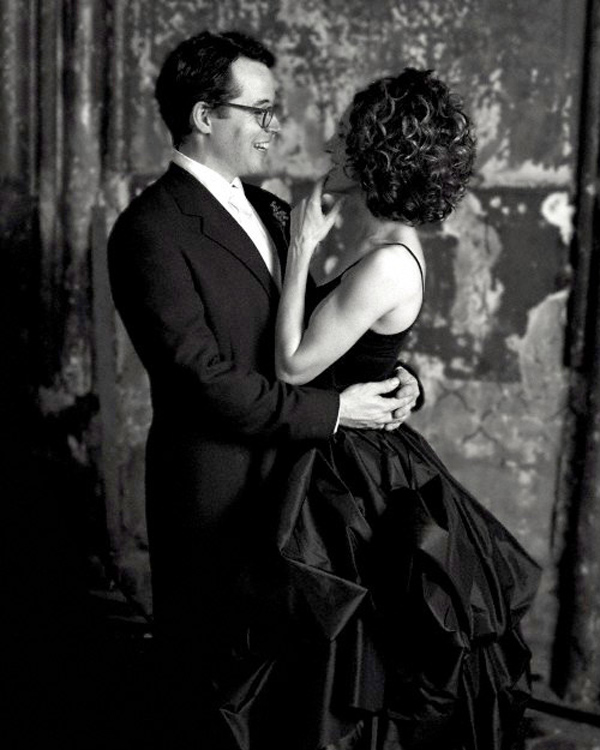 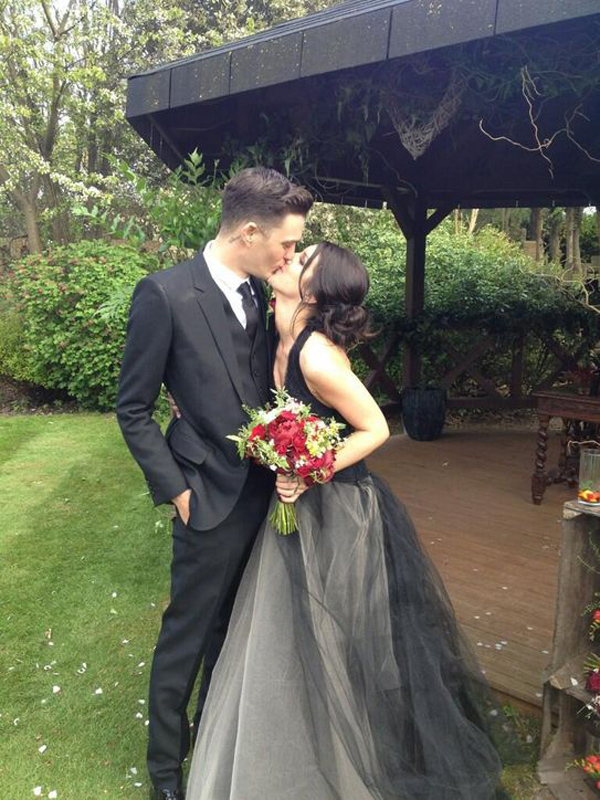 It's an unusual choice for a wedding, but a pretty strong case could be made for wearing such a flattering, slimming colour on the one day you'll be photographed the most. Plus, Vera did just do a collection almost entirely in black....so who knows? Maybe in a couple years it'll be the new pink. 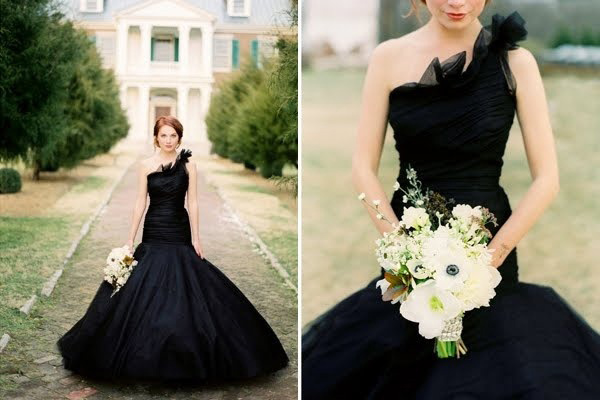 Dress by B Hughes Bridal via Jose Villa. 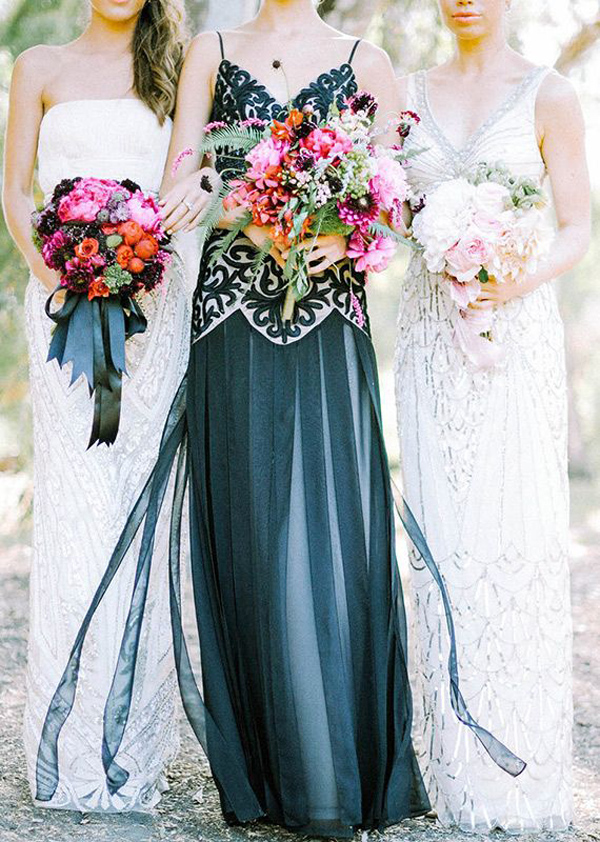 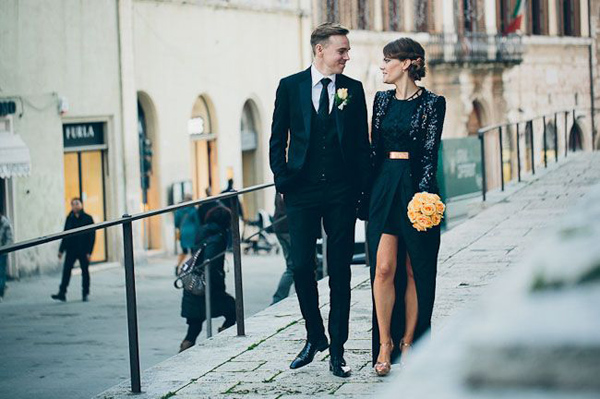 Dress by Sass and Bide via Green Wedding Shoes. 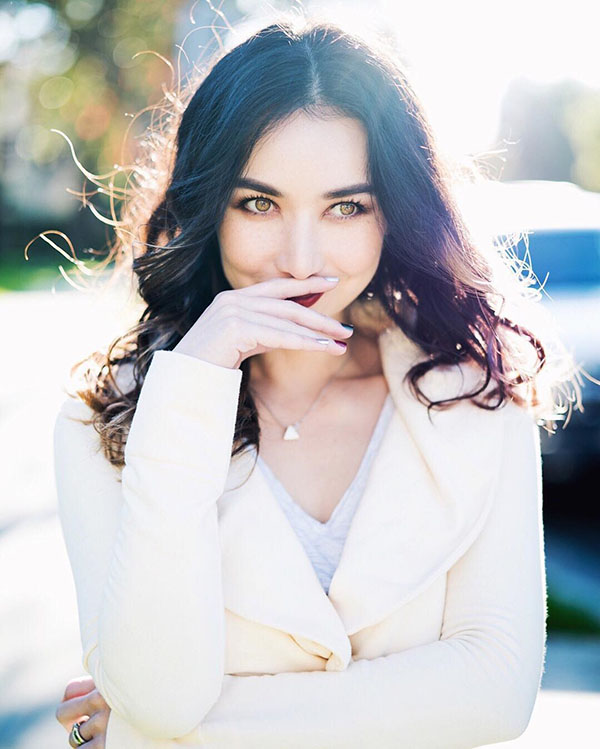 Emily Loke founded Paper Tiger Press in 2009 after noticing a lack of fine personal and event stationery in the Singapore market. Since then, it has been her mission to revitalize the wedding invitation industry by employing traditional artisan craft techniques to create her signature stately, multi-card invitation suites. Emily’s chic designs have appeared in top-tier publications such as Style Weddings, The Peak, Prestige Weddings, Singapore Tatler, Her World Brides, and the Business Times.